These objects are used in two ways: one as a foreground element, and the other as a place close to the subject matter. If used in the foreground, consider the layout and depth of field just as you would any other component. A person standing nearby gazing at the valley will increase the image's depth of field and provide proportion. If you're photographing a cliff, it's best to wait until someone is at the bottom. To show the size of the cliff, take a few steps back, use a telephoto lens, and let the cliff fill the picture. Cut off the top and put the figure on the bottom, so that the cliff looks like Mount Tai.

Some parts of the picture are blank, cannot be said to be wasteful. The concept of negative space refers to the use of white space to enhance the subject of a photograph.

When expressing loneliness and loneliness, negative space is especially suitable, such as photographing a lonely plant in the desert or a sudden rock in the sea. Think of whitespace as an object, like any other component, and then consider its position. You need to keep a balance between the amount of white space and the size of the subject matter to help you get the point across.

Everything you see in the frame becomes part of the picture, and it should be there for a reason. So take a closer look, and if you see something inappropriate, change your Angle or location. If there is something useless in the picture, don't shoot it.

The most common extras in landscape photographs are electrical wires, telephone lines and buildings in the distance, as well as small things like tree branches and rubbish. It's worth studying the frame carefully. If you don't pay attention to detail when you take the picture, you will probably notice it when you develop it, and so will most viewers.

Ordinary picture patterns cannot capture the grandeur of some scenes stretching for thousands of miles, such as vast grasslands, rolling mountains, and whole cities. What is needed to represent these scenes is space, which only panoramic photographs can do. Not so long ago, most of us couldn't get a great panoramic shot, but that's no longer the case.

Digital photography has revolutionized the production of panoramic images. Before we had our current cameras and software, taking panoramic photos required specialized (often expensive) equipment or long hours of hard work in darkrooms. The dedicated panoramic camera, which USES an ultra-wide lens or rotates the lens on an arc bracket, records about 140 to 360 images on an extended film.

If you're using a regular camera for a panoramic shot, you have to carefully take overlapping images and then meticulously assemble them into a single picture while developing the film, or you can cut and paste the printed picture. Of course, these methods are still used, and some companies make digital panoramic cameras that work in the same way as their film ancestors. But some people didn't want to buy another camera just to take panoramic shots, so a whole new approach to digital photography emerged. You still need to take the pictures that make up the panorama, but leave the rest to your camera or computer. 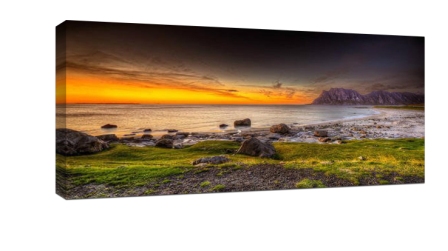 When shooting, don't move or zoom. When you take two pictures that you want to splice together, the lighting is likely to be the same; But if it's four or five or more, there's a good chance some of them are backlit. To make the resulting panorama look natural, you can't use auto exposure. You can lock the auto exposure button or shoot in full manual mode. Otherwise, you'll end up with a really weird picture.

Consecutive photos should preferably have 25 to 40 percent overlap, so post-production software has enough information to accurately combine the images. Find a marker and place it in one third of the picture. When you shoot the next picture, move the marker to one third of the other side (move left and right when shooting horizontal panorama, move up and down when shooting vertical panorama). Some cameras, such as the HP one, have an overlay in the viewfinder that helps you synthesize photos easily. After taking the picture, you can view it on the camera's display. Many cameras have a multi-screen display that allows you to look at more than one photo at a time. Some cameras even have a built-in composition feature that lets you preview and save photos, panorama and frame shots.

If your camera doesn't have compositing, you can download the photos to your computer and use graphics software. Much general purpose software has this function, just select the photo you want to use, click the mouse, and you are done. Composite features go by different names in different software programs (Adobe Graphics processors, for example, call it Photomerge), so you'll need to look in the "Panorama" menus of different apps.

When we look at a landscape, we make a series of mental adjustments based on our previous experience. For example, we have seen many pictures of the Teton Mountains, the Grand Canyon, and Old Faithful in Yellowstone, so it is easy to see their size. But estimating the size of an unfamiliar place is difficult, so we often rely on familiar objects -- usually people or animals -- for scale. The man standing by the oak tree told us how big it was, and the cows in the pasture told us how wide the pasture was.