I grew up a few steps away from the coast and have always had an innate fascination with the sea. And there's no better place to hone your skills than along the coastline. The diversity of the coast never ceases to amaze me, even in the most densely populated areas. Although the wild, wild and winding coastline is favored by many photographers, including me, it still has more charm and character waiting for us to develop. The coast near my home was not wild, but it offered many photography opportunities to the young me. I came back to it again and again, even for an hour. Because the environment here is so changeable, almost every time I come back here, I create a very successful photo.

We can use the sunset glow near the end of the day, or just before sunrise, to enhance the texture and texture of rocks and water. Not far from my home is Felpham Beach, a beach with no particularly dramatic coastline, but a soft, soft pink light that creates a non-human firework scene, in sharp contrast to the vivid seaweed green.

When shooting at sunrise and sunset, the different brightness of light and shadow means you can shoot with a slow shutter speed, and the surge of the ebb tide gives the final image a strong visual impact. I personally like to record some water flow in my photos, and the haze from a long exposure looks good too. Although this technique is not for everyone, I believe that photography is a creative process and there is no absolute right or wrong. 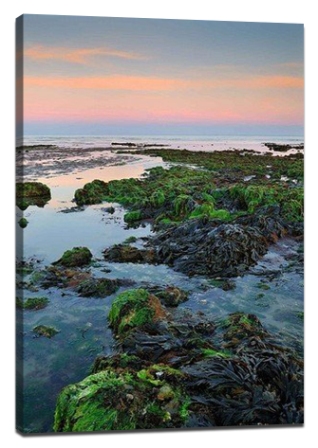 On many occasions, especially at dusk, you'll have to extend the exposure due to the fading light. This makes it more difficult to add dynamic effects to the surface. However, with the upgrade of sensors and the improvement of noise reduction technology, my seascape photos have started to use the highest ISO800. With a slower shutter speed, you can fundamentally change the look and feel of a photo, as this fog adds to the tranquility of the sea. Arguably, this new feature allows me to create great photos without having too much time to shoot. The following picture was taken in Portwrinkle, Cornwall.

Most beaches offer photographers the opportunity to capture sunrise or sunset, and planning your trip can greatly increase your success rate. On that day, the sun had sunk below sea level. But the sky still glows orange, shining on the coast of Kimmeridge Bay. I used some rocks that were illuminated orange as the foreground to make the details more interesting. Blue and orange always mix beautifully at this time.

You can never include the weather in your shooting plan, but even without the sun, the coast with the sea and wonderful light always offers you all the opportunities to create interesting pictures.

I carefully composed the picture, using a small piece of sea to separate the small island where the lighthouse is located from the mainland.

I always use the shutter release, so that I can see the wave rolling, so that I can accurately capture the wave dynamics. In addition to the infinite variation in the position of the tides, weather, and sun, the coast offers a variety of geological conditions, and when taking such well-organized photographs, I spend more time carefully framing and framing the rocks to the visual center.

Having a sturdy tripod is a prerequisite for seascape photography, especially if you want longer exposures to create the feeling of water moving. I've been using a Manfuto 055CLB for years, and although it looks scarred, it's still very reliable. The coast is a harsh environment for our precious photographic equipment, including your tripod.

If you soak a tripod in seawater, the seawater will also damage the equipment. So it's important to rinse your tripod, especially the foot lock, with water at the end of each shoot.